The original title: the Chinese people only 20 years to do one thing, but let the Westerners admire the five body cast

He ran toward the stars of the sea?

time freeze in the evening of September 15 23:23: China “day eye” father, the famous astronomer Nan Rendong died of illness, at the age of 72 years old. 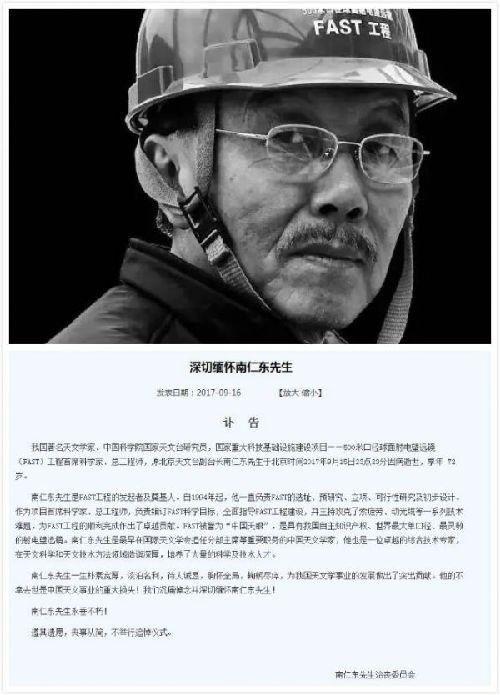 In accordance with their wishes, people did not hold memorial service for Nan Ren Dong.

He left, as he was so low – at a time of lack of patience and concentration, the scientist who had always stood behind the “eye of the eye”, devoted nearly a third of his life, Only to build the world’s largest, the highest level of radio telescope.

Memorial said that he is climbing the peak of scientific research brave, more heroes.

For a whole week, because of his departure, the international astronomy fell into collective sadness.

For a whole week, because of his departure, international astronomy The community into a collective sadness.

“This is a huge loss of the scientific community.”

Many foreign scientists who have had an intersection with Nan Ren Dong have expressed their grief on the Internet.

United Kingdom Joad Demirel · Burbank Observatory face book account issued condolences: “sorry to learn that our Chinese counterparts, professor of South Ren Dong’s death he was the chief scientist of the world’s largest radio telescope, also. Has been deeply respected by colleagues from around the world.We miss his courage and enthusiasm for astronomy. “

The same day, the Netherlands Leiden University astronomical center director Michael Garrett also In the social media to inform colleagues that the bad news: “This morning learned a sad news.” 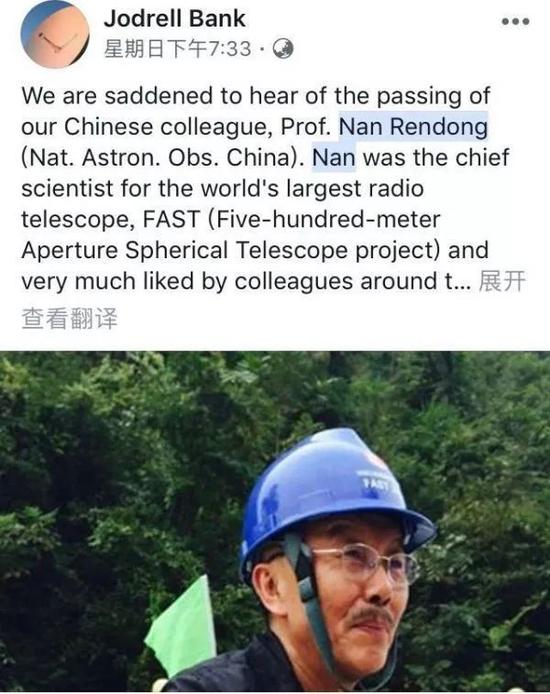 As the Chinese scientist’s last farewell, the national scholars message is moving:

“Unique” projects in the world, listen to the universe with China’s own radio telescope 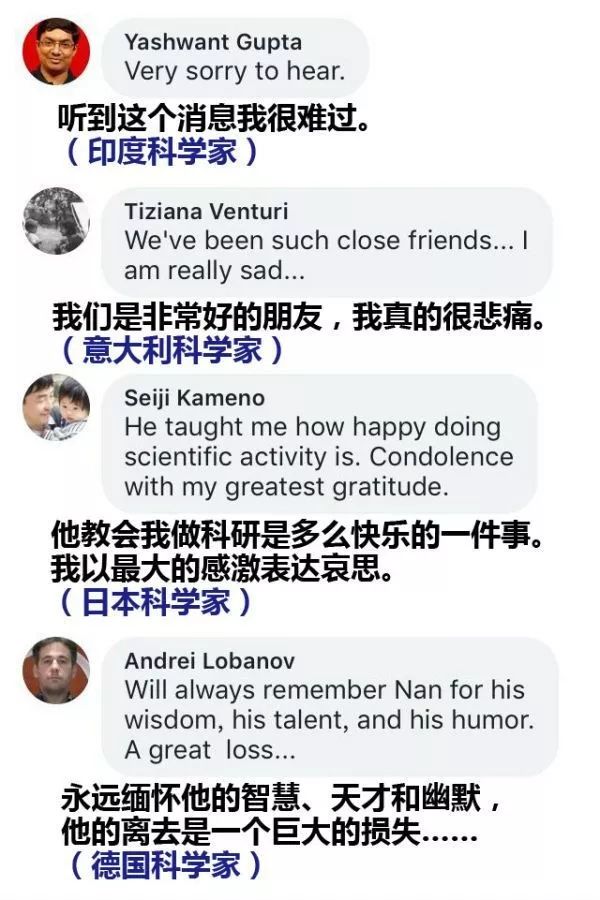 “Who are we? Where are we from? Are we alone?” This is Nan Ren Dong often talk about the three issues.

If the story of the “three body” begins with the earth, Ye Wenjie receives the radio waves from the depths of the universe and answers.

then the story of Nan Rendong can be said to be “three-body” prequel “- he spent 24 years, led the team to complete the” China Eye “, is to help humans from the universe of white noise more sensitive Distinguish meaningful sounds.

Nan Ren Dong likened it to “listen to the cicadas from the thunder.”

Everything from 1993 to talk about.

In Tokyo, Japan, a consortium of global radio scientists gathered in the world, it was suggested that the global radio wave environment continues to deteriorate before the human should build a new generation of radio telescopes to receive more information from outer space. 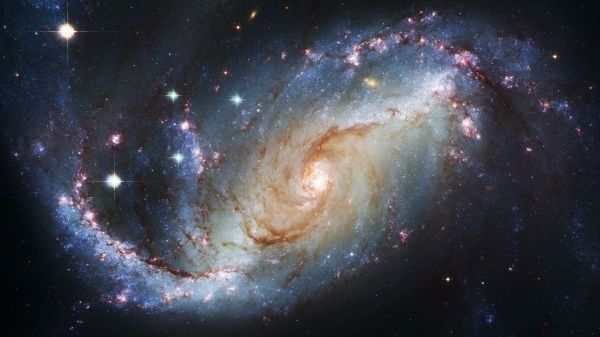 Since then, Nan Rendong’s life focus no longer away from this theme – “the construction of China’s own new generation of radio telescope.” In September 2016, he finally turned the idea into reality. FAST, 500 meters caliber radio telescope, in the cable under the pull of 350 meters instantaneous paraboloid, can be observed in the flexible angle, to receive a broader, more weak signal.

▲ “The Eye of the World”, the world’s largest single-aperture radio telescope

It is a boot, you can receive 1351 light years outside the electromagnetic signal, the future can be used to capture alien life signal.

Because he, China has since entered the era of stars 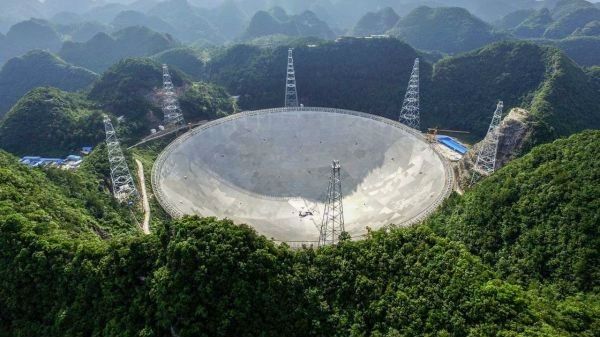 20 years only to do this one thing, his colleagues and students said, Nan Rendong’s persistent And straightforward most admire.

In order to find a suitable place for the construction of the telescope, he traveled all over the 1000 depression, traveled hundreds of cottage, in the southwest of the mountains for 12 years, the final site will be identified in the Yunnan-Guizhou Plateau Karst depression.

▲ Guizhou cardIn the future, in order to fight for the project, Nan Rendong and ran: the major colleges and universities in the north and south, at home and abroad a variety of scientific and technological meetings, have his shadow.

exposure to the “eye” scene, you can sincerely feel the “grand” the meaning of the word, more importantly, it makes the Chinese astronomy science catch up with the West. On the day the British media wrote: China’s giant radio telescope is a symbol of its ambitious scientific ambitions.

There are foreign media forecast: China has entered the era of stars, it (FAST) will continue to lead the world for 20 years. 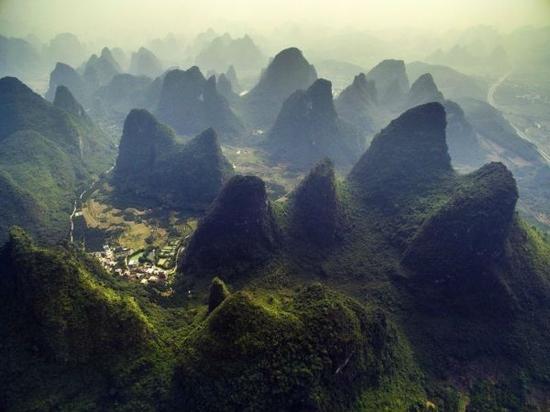 “A really great scientist, you will be with the human civilization in the same, with the vast sky with.” There are microblogging friends in Nan Ren Dong The death of the news to pay tribute to him.

More people are moved to his focus. There are domestic media evaluation that there is a Nan Rendong such a scientist, there are a group of lovely young people on the site, the Chinese people from the “Chinese dream” will be getting closer!

There are three days, that is, “Eye” completed the first anniversary of the start (25). There is a netizen excerpts Nan Ren Dong during the famous period, as the last memorial: 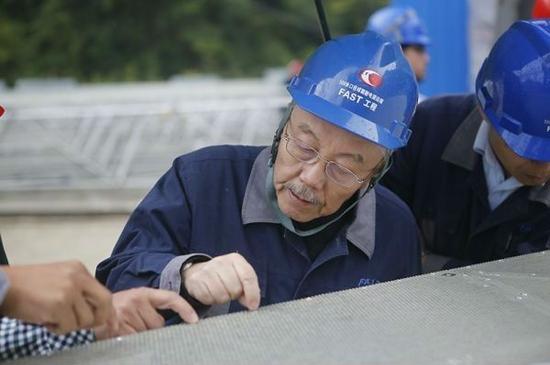 “beautiful universe of space, with its mystery and gorgeous, call us through mediocrity, into the vast expanse of the vast – “

Caesarean section or product you will choose which one?

Human ancestors or had mate with a “ghostly” ancient man

He did only one thing for 20 years, but let the Westerners admire the five-body cast