The original title: 92 countries won the low-cost high-quality anti-AIDS drugs: the annual average of only 75 US dollars, Africa, the most beneficial 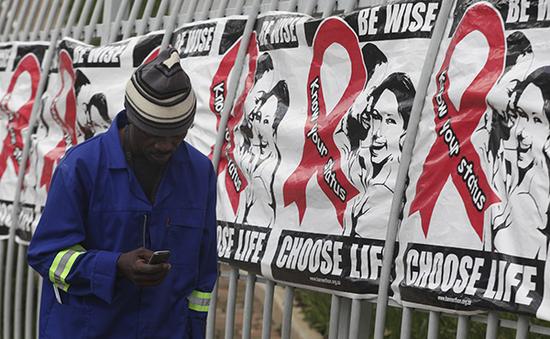 Johannesburg, South Africa, men through AIDS prevention posters. Eastern IC data is deeply troubled by AIDS in Africa, access to a groundbreaking pricing agreement. September 22, surging news from the United Nations AIDS Program (UNAIDS) was informed that South Africa, Kenya, more than 90 low-income countries, AIDS patients will be widely used in rich countries, the most advanced anti- Reversal of virus treatment drugs, the cost of each patient per year is only 75 US dollars (55 pounds). The agreement is sponsored by the governments of South Africa and Kenya, the United Nations Program on HIV / AIDS (UNAIDS), the Clinton Medical Action Organization (CHAI), the Bill and Melinda Gates Foundation (BMGF), the US President’s AIDS Emergency Plan (PEPFAR), the United States Agency for International Development (UNIDID) and the UK Department for International Development (DFID), as well as Mylan Laboratories Ltd. and India Alabindu Pharmaceuticals (USAID), the Global Fund to Fight AIDS, Tuberculosis and Malaria, the Joint International Drug Purchase Facility (UNITAID) Aurobindo Pharma) will benefit 92 low- and middle-income countries and Africa will benefit first. The agreement is expected to accelerate the promotion of treatment programs as a global work, enabling high-quality antiretroviral treatment to benefit 36.7 million people living with HIV. UNAIDS estimates that in 2016, only half of the HIV-infected people (19.5 million) received life-saving drugs. The Gates Foundation will ensure the lowest selling volume of the new combination tablets using dobutarwe (DTG), thus avoiding the use of old therapy and the resulting resistance. In return, Mylan Laboratories Ltd. and India’s Aurobindo Pharma agreed that the annual consumption of each drug was $ 75 per patient. This price is lower than the price of the drug in the United States. DTT is a first-class integrase inhibitor widely used in high-income countries and is recommended by the World Health Organization (WHO) as an alternative first-line AIDS treatment program, as well as the US Department of Health and Human Services The adolescent Antiretroviral Guideline Group recommends a preferred treatment regimen, which is also recommended in many other countries. In addition to improving the quality and duration of treatment, the widespread use of dobutarwex (DTG) is expected to reduce the cost of first-line HIV treatment programs while reducing the need for more expensive second- and third-line treatment programs. In 2017, the World Health Organization (WHO) issued a guide to countries on how to safely and quickly turn to DTT-based antiretroviral therapy. “The agreement will improve the quality of life of millions of people living with HIV.” UNAIDS Executive Director Michelle. “In order to achieve 90-90-90 (ie, 90% of infected people in 2020 are aware of their infection, 90% of infected people who have been diagnosed receive antiretroviral treatment, 90% of them are receiving anti-viral treatment,” said Michel Sidibé. Virus treatment of infected patients is inhibited) treatment goals must be provided with an updated, affordable and effective treatment program, from Baltimore to Bamako, without delay. “South Africa plans to release new in April 2018 “A substantial price cut will save as much as $ 900 million in South Africa over the next six years, which means that we can enable $ 900 million in resources for more patients,” said Aaron Motsoaledi, Minister of Health, South Africa. The treatment with good viral suppression will enable us to control the epidemic of AIDS more quickly, “said Dr. Cleopa Mailu, Minister of Health of Kenya Cabinet.” Studies have shown that dobutillas (DTG) provide better tolerant drug side effects Lower, fewer drug interactions, and less genetic resistance. In view of this, in July this year, Kenya approved its inclusion in national antiretroviral therapy (BMGF) has recently completed a ceiling price agreement with Mylan and Aurobindo with the support of the Clinton Medical Action Organization (CHAI) to accelerate the low Price to more than 90 low-income countries in the public sector to provide the new compound preparation. These agreements set the price cap for DTG, which is estimated to save more than $ 1 billion for public sector procurement units over the next six years. Health ministers and project managers should expect to be able to purchase DTGs in 2018 at an average price of $ 75 per patient per year.

Zhu Bangfen: After the return of Mr. Yang Zhenning made five contributions